Visitors to Stevenage Museum may have noticed that we have a large stuffed animal (taxidermy) collection in our Natural History gallery. Taxidermy is the art of preparing, stuffing and mounting animal skins and has been practised for many years by taxidermists, the earliest examples having been recorded in the Middle Ages. It is a method of preservation and has been used mostly by hunters to show off their most impressive kills and natural historians so that they can study increasingly rare species. It was also popular in the Victorian times, as people thought they were a stylish decoration in their homes. Though it is less common to see taxidermy on a household level now, some pet owners will have their beloved cats and dogs treated in this way as an homage to their existence!

Mr Fox is a figure I remember from when I was a child, visiting Stevenage Museum with my mother and sister in the 1990s and early 2000s. Though my sister and I found the gallery a little scary at first, we were delighted by the small furry animals and loved the fact that we could stroke the top of Mr Fox’s head. We weren’t the only ones either, poor Mr Fox has had a number of operations over the years to patch up small injuries after visitors played a little too roughly with him!

Mr Fox was donated to the Museum by a Mr Colin Bladon in October 1968 and understandably, after over forty years of service, has gone into retirement, so you can’t see him in the galleries any more. However, if you ask the staff at the museum shop whether you can meet him, they will happily oblige. I think he must get a bit lonely in the store room now after all of the attention he used to get…

Richard Carpenter’s dolls’ house is one of our star items; its delightfully miniature nature draws a great deal of attention as it slowly revolves, allowing you to see it from all angles.

Richard Carpenter was born in Stevenage in 1890 and in 1903 he began work at the Educational Supply Association (ESA) as an apprentice joiner, cabinet maker and polisher. Trading began here in 1883 on Fishers Green Road and was the first factory in the town, offering an alternative to the otherwise largely agricultural work available. The ESA was known for providing low cost but good quality furniture and was the leading supplier for folding classroom partitions. 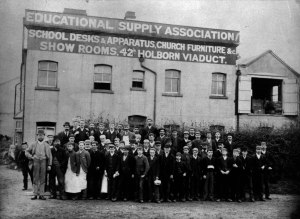 The dolls’ house itself is based on a housing design by Mr. Leonard who worked in the drawing office at the ESA with Mr. Carpenter. His design for a school table and chair became a symbol of the post-war classroom. His innovative designs spread wider to homes and housing projects, but can be seen very clearly in the image of this modern and practical furniture design.

It was Mr. Carpenter’s daughter, Yvonne, who inspired the building of this delightful house; its execution was so perfect however that it never became a plaything. The dolls house took nine years to complete, including building and furnishings, by which time his daughter had grown to be thirteen years old.

The dolls’ house illustrates the design principles that inspired Mr Leonard throughout his career. You can see the simple shapes, clean lines and minimal surface decoration in both the house and its furnishings.

This page is just one way to contact us, you are always welcome to call or email us as well. If you ask your question here we can post the answers to the blog, if they are of general interest. Please enter your question in the form below: