When planners designed Stevenage new town only 1 in 10 families owned a car. Although they planned for some growth, they didn’t predict the explosion in car ownership that meant it doubled in the 1950s alone. By 1970, as the newer neighbourhoods were built, half of households owned one or more cars and today four in five have at least one car. What that meant for local residents was that parking and garages were always in short supply and still are today.

Did you know that Eric Claxton, the engineer who helped plan the town, wanted above all to make it safe, and a big part of that was preventing accidents:

“Behind all this was my experience of the terrible carnage of wartime, and in my heart I, I’d made up my mind that if I could possibly help it, nobody should ever be injured again.  So, Stevenage sets out, and it set out from its very beginning to be as safe as I could create it.”

To do this, he thought very carefully about the road layout:

Meanwhile, in the early years of the new town, the Great North Road (A1) still went through Stevenage, cutting off the industrial area of Gunnels Wood Road from the new homes to the east. Every morning and evening hundreds of workers had to cross the road, traffic was fast and lighting was poor. Local people highlighted the danger in the Stevenage Residents’ Federation newspaper, The Stevenage Echo, but nothing was done and eventually someone was killed. A protest was organised and people took a coffin for a slow walk where the accident had happened, causing traffic jams as the country’s main east coast artery was clogged. They demanded a safe way of crossing the road. 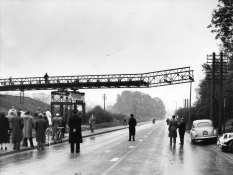 Waiting fro the Bailey Bridge to open in November 1955

In response, a footbridge was erected where Broadhall Way now crosses the road and the Stevenage by-pass (A1M) was finally opened in 1962.

Along with the hunger for cars came the petrol stations to fuel them. If you are local you may remember some of these!

The opening of the Chevron Garage on Cuttys Lane in 1970.

The Central Garage in the Town Centre, taken in about 1958.

Creaseys petrol and service station opens on Cuttys Lane in 1958.

And finally  . . . just because they are great photos, here are some younger residents getting up close to cars. 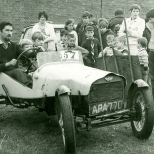 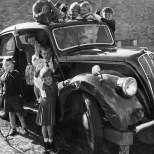 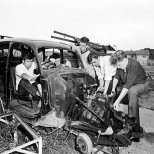 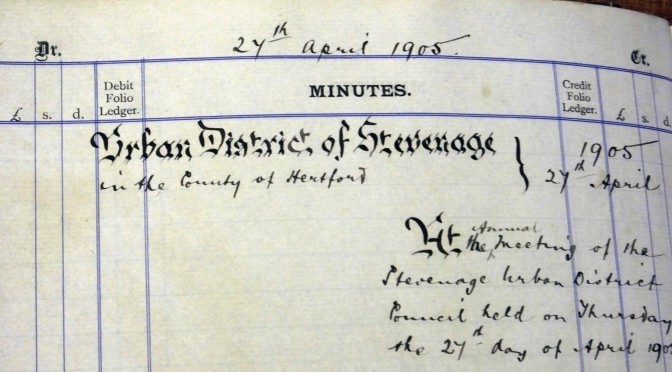 It was proposed by Mr. Ellis, seconded by Mr. Day.

That this Urban District Council petition the Hertfordshire County Council to make application to the Local Government Board under Section 9 of the Motor Cars Act 1903 that no person shall drive a motor car at a speed exceeding eight miles an hour within the whole of the Urban District of Stevenage.